As a lifelong music lover, one of the joys for me is to discover an
unknown act that really seems to have qualities that are deserving of a
“known” status- at least known in the world of underground music. One
place that I go for unknown acts are net labels. For those of you who
don’t know, net labels are web based labels that release music
exclusively in mp3 (or similar) format and album artwork for free. The
only thing that wouldn’t be included on a net release is an actual cd.
There are a variety of styles and genres to be found in the world of net
labels, but the majority tends to be electronic music. Most times the
releases are easily forgettable and ok at best. But once in a great
while I find a really worthwhile gem. 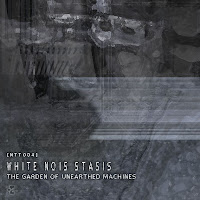 One such release I found a
while back was on the Entity net
label. The project was called White Nois Stasis and their release
was “The Garden of Unearthed Machines”- a 7 track ep of pulverizing
beats, uncomfortable ambient sounds and an occasional melodic element.
The opening track “Abyssmalescent (Reflxx)” kicks the ep off with steady
harsh rhythm, filled with distorted percussion and the sound of hissing
steam filling in for cymbal crashes. Vocals are present, but are barely
recognized as something that belongs to a human. This track alone will
determine if you will stick around for the rest of the ep or call it
quits. I stuck around.

“Agony” is the next track that follows and continues with the same
brutality of the previous track, but considerably more straightforward
in that it has a much more dance friendly beat. The third track is “The
Caul” which is a 4 and half minute piece of dark factory yard ambience- a
factory that has taken numerous lives and still houses the souls of its
mauled workers. Continuing the ghostly theme is the track “12 Bit
Spectre”- frantic beats that stray off a 4/4 course and distorted synths
and percussion are back. But a new element of melodic piano lines are
introduced as well distorted guitar riff fragments. This is the track I
would show to someone that harsh electronics are not just merely a guy
programming a few repetitive synth lines, there’s a sense of the track
being composed.

The brutality continues but gets turned down a notch or two on the track
“Alihamet Wormhole”- the track is noteworthy for the inclusion of what
sounds like Hindu chants and a sitar. Truly bizarre indeed. Next is my
favorite track “I Will (Tr)eat You Well”. Another track featuring actual
vocals, and this time they sound almost human, but are still beyond
comprehension. Heavy guitar riffs drive this track during the chorus- or
what passes for the chorus in the track. This is probably as close to a
pop song as this ep gets, but there’s no chance of this song being
played on radio next to crap like Orgy and their third rate covers.

The ep’s closer is “The Garden of Unearthed Machines (UndaCova Remix)”-
my least favorite track. As this track is a remix I’m left to wonder
what that original sounded like. What’s presented here is a mid-tempo
broken and distorted rhythm that even I consider very monotonous. This
track would be right at home on the Ant-Zen label of power noise
artists, and as such isn’t a terrible track. But it is a letdown after
the outstanding fury of “I Will (Tr)eat You Well”.

The ep is available
absolutely free and
legal here. Alas I couldn’t find much else about the artist on the
web other than a website that
hasn’t seen an update since 2003. Rather unfortunate since this is
someone exploring some very harsh and brutal sounds that I found were
still accessible, listenable and enjoyable.

Email ThisBlogThis!Share to TwitterShare to FacebookShare to Pinterest
Labels: reviews

Radio Ardilla
Squirrely kinda guy- been doing the web dj thing for over 15 years now. Will I do it for 15 more? Who knows?